An MHTL spokesperson would not confirm the move to ICIS, only saying the company would release a public statement on its website.

A source said MHTL plans to idle its two smallest plants until feedstock natural-gas curtailments improve. In fact, the plants have only operated when there was maintenance at the other facilities.

Government-imposed natural-gas curtailments only just recently retreated to about 20% from as high as 30% over the last several weeks. Sources in Trinidad have said they expect curtailments to improve this year.

Trinidad and Tobago media reported on Sunday that MHTL (Methanol Holdings Trinidad Limited) was closing two of its five methanol plants on the Caribbean island. There were no details on the timeline of the shutdowns.

Methanex also has two plants in Trinidad, Atlas and Titan, with capacities of 1.8m tonnes/year and 875,000 tonnes/year, respectively.

The Guardian newspaper in Trinidad and Tobago reported that the announcement to shut the plants was made on the afternoon of 3 March.

A source said methanol prices will likely strengthen in reaction to the shutdowns. However, the US market has become somewhat accustomed to short supplies and volatile production from Trinidad.

According to the latest statistics from the Ministry of Energy and Energy Industries for Trinidad and Tobago, methanol production was down by 16% in 2016 compared to 2015. Total exports from the country were down by the same amount.

Meanwhile, US imports of methanol from Trinidad were down by 42% in 2016. The decline has been partly driven by stronger production in the US, but weak production from Trinidad has also played a factor. 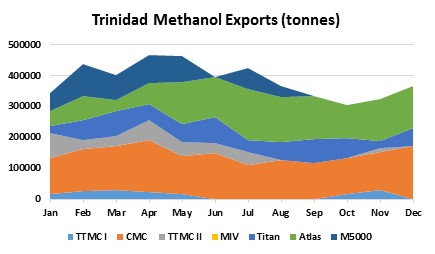 US methanol spot prices were last assessed by ICIS at 130 cents/gal, while contracts for March were assessed at 148 cents/gal, both multi-year highs.