Europe methanol spot high as some see bumpy road ahead

LONDON (ICIS)–European methanol spot prices have rapidly mounted a multi-year high, the result of 2016’s weak prices combined with 2017’s production hiccups, with some players anticipating a “bumpy road” for supply in the near future.

Though the pace of steep increases seen earlier in the year has slowed in recent weeks, spot methanol traded above €400/tonne FOB (free on board) Rotterdam in the week ending 3 March, for the first time since January 2008.

Prices had skirted close to that mark in 2014, before falling away.

Supply is tight in Europe, both in the Mediterranean and in northwest Europe, a hangover from last year’s prices trailing other regions, as well as a more recent number of global outages.

“After all those months of optimising towards the east, most Middle East [methanol shipping is going] to Asia rather than Europe; you see the effect of that right now, hardly any spot material available,” said one producer.

“Inventories are depleted, with recent issues in the Middle East, mid first quarter… then healthy demand in Europe. Europe is tight,” according to another producer. 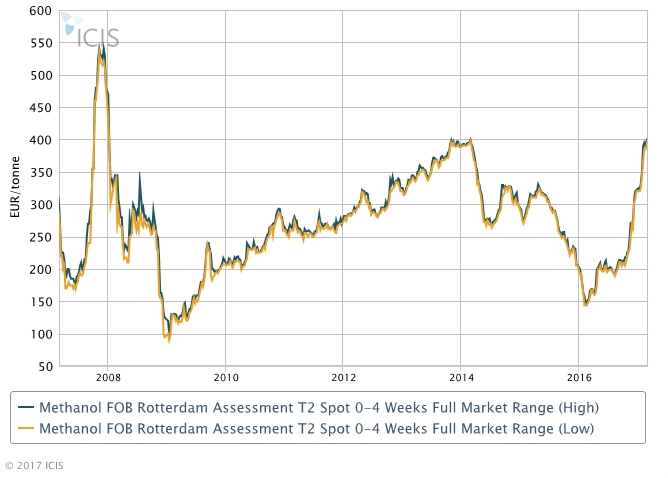 “Until August or September [2016], both Europe and US were definitely way lower than China… I guess producers really had no fun anymore selling cheap in Europe, and sent cargoes to China, because there were some new MTO [methanol-to-olefin] plants and they could sell it,” one buyer said in late February.

A small plant in Saudi Arabia may currently have maintenance, several market sources said on 3 March.

A Russian plant is expected to have a planned turnaround in the second quarter of 2017, though further details could not be obtained.

Gas curtailment has hindered Trinidadian output; Iran’s Zagros trimmed production rates at one plant and shut down a second, though both are now understood to be operating at higher rates.

Oman’s Salalah plant is running again after a small glitch. Azerbaijan’s 560,000 tonne/year methanol plant in Baku is not expected to restart until the second quarter of 2017 at least.

March could be start of a bumpy road – but not all agree
There are conflicting expectations for the next few weeks, with traders expecting little change to the tightness, while buy-side feedback has pointed to vessels due into Europe in March as potentially offering some relief.

“A couple more ships [are] coming in. Availability should be not so much an issue,” said a second buyer last week.

A third seller disagreed, arguing there is a “bumpy road ahead”.

It said: “It’s always the best quarter in the year. I do not see any relief on tight supply. [There is] gas curtailment in Trinidad and around the globe, pipeline production is not in balance.”

The second quarter is typically the strongest for methanol consumption, according to sellers, with downstream products’ demand for formaldehyde and methyl methacrylate (MMA) lifted by the paints and coatings season.

No arbitrages are open between global regions, according to one of the sellers, who suggested it is not obvious that volumes will flow readily to Europe.

For Middle East producers, choosing between Europe and Asia, prices are currently at an even level, while volumes are not likely to come from the US, said the source.

Plants have not reacted by switching off production in recent months, according to one of the producers, adding that this could indicate they will continue to run and draw methanol volumes.

China’s Jiangsu Sailboat Petrochemical Company officially announced in February that a 10-day test run at its new MTO plant had been completed.

Industry sources said the 833,000 tonne/year plant was commissioned at the end of 2016.

On the other hand, buy-side feedback pointed to Chinese prices coming under pressure recently; if methanol plants run at decent rates, this could continue, said one of the buyers.

One clear bright spot which is easing the situation for both suppliers and consumers is improving Rhine river levels.

What is clear is that current highs have proved a surprise to many, even if an increase had been anticipated sooner or later.

As one trading source put it last week: “If you’d asked me a forecast for this year at the end of last year, I wouldn’t have put €400 [per tonne], that’s for sure.”